Raising approximately $13,000 in support of Victory Living’s Social and Recreational Program, which benefits individuals with disabilities in Broward County, this year’s Queen for a Day Luncheon proved to be a smashing success! Sponsored by Akerman LLP and Fred and Debi Baldwin, the event was held on November 1, 2017 at the Fort Lauderdale 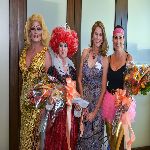 Country Club. Attendees wore their best "queenly" attire to wow the pageant judges and compete for the magnanimous “Queen for a Day" title. Joyce Picou, dressed as the Queen of Hearts, claimed the 2017 Queen for a Day title and Jodi Corn, dressed as the Fitness Queen, was the runner-up. Special thanks to Breakthru Beverage for donating the champagne, MC Nicolette from LIPS Fort Lauderdale and our esteemed judges Steve Shapiro, Kenny Walker, Eric Pfeil and Laurie Menekou Ernest-Jones for donating their time.