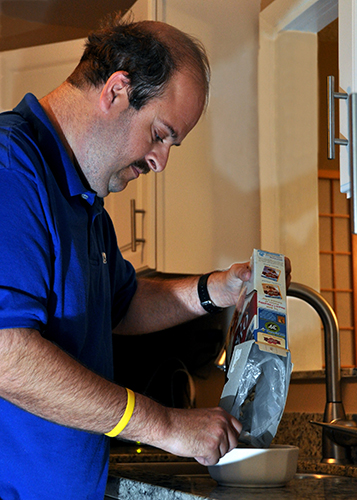 Jay was the prettiest toddler you have ever seen. He had white platinum-colored hair and the sweetest personality you could imagine. He was so much fun and such a loving young boy. He crawled a little bit later than normal and he walked a little bit later also. But this was not a major issue.

As he got to be 3 and 4 years old, he was amazingly cute with that platinum hair and gorgeous smile. People would stop us in the store and tell us they had never seen such a cute little boy.

And certainly, mom bought him these great clothes that showed off that smile and hair. We did notice that he struggled in the play groups that formed. He did not quite enjoy himself as much and the other kids seemed to play without him.

When Jay was in 1st grade, we struggled with his teacher because she was not tolerant of him and we thought we had a teacher issue. Then when he was in 3rd grade, we were fortunate to have the greatest teacher. She worked hard with him and recommended that we have him seriously evaluated because he was not keeping up. Fortunately, we were able to understand his capabilities.

We were devastated when we were told that his future was very limited due to physical and mental abilities.

Middle and high school was a difficult period for Jay. Suffering from psoriatic arthritis he was in extreme pain and developed grand mal seizures (epilepsy). We looked back and realized that when he had speech therapy, allergies, low grades and many other issues that there was going to be a lifetime of problems. The special education system of the school district did minimum for him. It did little to prepare him for life and, after the special diploma at age 19, we wondered what our next step would be.

Jay was accepted into Goodwill's training sessions to help find employment. The program director was fabulous. She worked very hard to help him develop and find his way. In a meeting to review his progress, she recommended a program that teaches developmentally disabled adults how to live and work on an everyday basis. The program was called Victory Living Programs.

After meeting with the executive director, we felt that this was the right place for Jay. In the program, Jay was able to learn things of everyday life that made him independent. He learned cooking, he learned that cleaning his apartment was essential for cleanliness and sanity. This was different than just a mom telling him what to do. This was someone else teaching him that it was a requirement for his independence.

Jay was a fast learner on these issues. He was encouraged quickly to move into an apartment with 2 other individuals. As everyone would, he had some adjustment time to be able to live with 2 other people, but within a few months he loved his freedom! But he was also taught that with freedom comes responsibilities.

Victory Living Programs worked with him in extreme detail and helped him to learn the disciplines of living. They worked with him on cleanliness, on cooking, on budgets and rent.

But now, Jay also needed Victory Living Programs to help in other ways. He needed help in finding a job that he could handle. They worked with him to find a job and he ended up working at Speigel's Outlet store selling ice cream. They helped him understand that he had to be on time, look presentable and work hard for his money.

Jay flourished because he was now helping to pay for his own bills. He had a little spending money and he loved the people. And the job gave him a great confidence and a a feeling of self purpose.They helped Jay in many ways. They checked his food. They watched his medicine and made sure he was safely managing his scheduled.They visited regularly and helped him manage his money and write checks for his bills.

Fast forward again. Now he has been with Victory Living Programs for 22 years. He now looks at all the other clients as family and the counselors as his support system. We recently decided that we wanted to move to North Carolina to spend quality time with our new granddaughters. We did extensive searching for a good life up there for Jay. We had an agency ready to take him. We looked at apartments near where we were going to live. We searched the government agencies to find all the services that we could for him. Once we were comfortable that he had a good situation, we got ready for the move. After working with Jay and taking trips up to NC with him, Jay asked if he could talk to me. He asked if he could stay in Florida because he did not want to leave all of his friends and acquaintances. He said that we were only a phone call away and he had all the help he needed in Florida. He explained that he had his second mom in Bobbi (the executive director) and all the counselors would take care of him.

Well I learned a lot from that conversation!!! Jay gave us the confidence to let him try to live in a different state.

Victory Living Programs was more than just an agency, it was family, mom, dad, sister and brother. It was fun, learning, earning, and having independence. IT WAS FAMILY TO JAY. We got all of our money's worth in that one conversation. And to also note, after 1 1/2 years, he is doing great and becoming even more independent and confident. They did more than teaching, monitoring, and supervising. They gave our son an independent life!!!

I have a son with a developmental disability. Upon graduation from high school, Joaquim went through Vocational Rehabilitation and was referred to an organization for job placement. He was able to secure various jobs, but has not been able to maintain employment, due to a variety of reasons. Vocational Rehabilitation funding is short-term which assisted with helping him seek employment, but not providing the on-going support he needs to be able to maintain a job. He is waiting for funding for services through the Agency for Persons with Disabilities which would cover the cost of the follow-along services. Unfortunately, he is one of many thousands of individuals waiting for funding in Florida.

As a result, Joaquim was forced to stay at home. My husband and I both work and our younger son is still in school, so this meant he was home alone all day by himself. The skills that Joaquim had worked so hard to develop through the years were beginning to be lost. We also noticed an increase in behavioral issues. Thankfully, we found Victory Living Programs and were able to enroll Joaquim into their programs. He participates in all their social and recreational programs. Through these programs, he has not only been able to maintain his skills, he has also developed new skills.

Joaquim's patience and ability to get along with others has improved tremendously, as well as his physical and mental sharpness. The services and training that he receives from Victory Living Programs have been invaluable. The staff is amazing and has been of great benefit to Joaquim's further development. This program has been a tremendous asset to my son's life.